When you are running a meeting, is this what you see? Yawns, people propping their heads up, glazed eyes, side conversations? What can you do to get people refocused?

Guess what? I’m going to advocate for play. Aren’t you surprised? 😉

I’ve talked before about word games at meetings, but you need something more active when people are starting to nod off. Get people up and moving, as well as thinking about something different. Here are some options for games to play that get everyone up and out of their seats, and giving them a new perspective on things.

Get everyone on their feet, and divide the group randomly in half. Get everyone walking around the room randomly. Half the group should look others in the eye while they walk, the other half should avoid eye contact. After a while, have them switch.

When you stop, debrief their experience. How did it feel to look or not look at people? Did their posture and attitude and confidence change? Does one feel more natural than the other?  What were they thinking? I like to talk about how changing our body posture affects how we feel.

In this game, get everyone in the room to silently choose two other people in the room. Without talking, or indicating who they are connected with, ask them to stand equidistant from both people, so they make a triangle. There will be lots of movement, as people realize they have to shift position when their targets shift position, but eventually the group will settle. When they are still, ask one or two people to move to the far side of the room, and the whole group will have to shift and settle again.

When you debrief, in addition to asking for their take on the exercise, make sure you tell them that every group is a system, and whatever affects one part of the system affects everyone.

That’s The Way The Arrow Points

I don’t have any specific points to make in the debrief, just that this makes people use their brains in an often uncomfortable way.

For example: Person A says “I was walking my dog on the beach the other day and he ran into the water and got soaking wet. Then he ran back to me and shook himself off…” and Person B says “Shook. I shook hands with someone at a networking event last week and I had never felt a dead fish handshake before but this person really had no grip whatsoever…” and Person C says “Grip. I’ve always wondered what the grip does for a movie production. And does the Best Boy grow up to be a Best Man? I’ve always wondered…” Try to get everyone to interrupt at least once.

This is very hard for some people, but hopefully it will help encourage even shy people to step in. You may need to encourage the more aggressive members to hold back to give the quieter people a chance to step in. Be sure to ask people for their feedback after the game to see how they felt and what was hard or easy for them.

Start off with everyone roughly in a circle with space in the middle. One person goes in and stands with their arms overhead and says “I’m a tree.” Another person goes in and holds one arm and says “I’m an apple on the tree.” A third person sits down by the first person’s feet and says “I’m Sir Isaac Newton sitting under an apple tree.” You are now in a tableau. The third person to join the tableau chooses who stays. Maybe this time it’s the apple. The other two people leave, and the person who stays says again “I’m an apple.” Now a random person from the circle comes in and poses in relation to the apple. Maybe they’re eating the apple? A worm in the apple? A lunchbox around the apple? A third person joins the tableau and announces who they are, then picks who stays and the others leave. And so on. This can go on for quite a while, and it can be very funny. In the end, try to get them back to having someone say “I’m a tree.”

Debrief asking about what was hard and what was easy, why you did that exercise, how people had to pay attention to each other, that sort of thing. 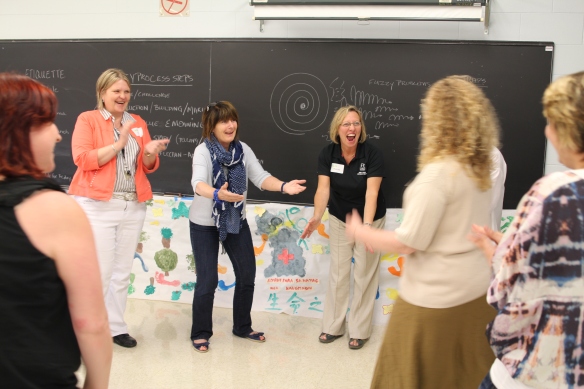 What other energizers and games have you played? I’m always eager to learn more. Have fun with these, and let me know how they go!