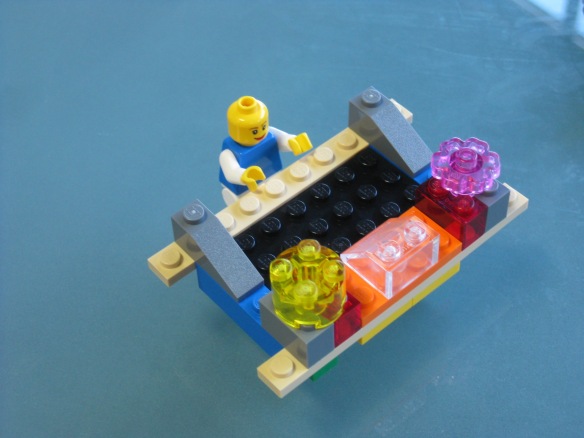 This employer is sitting at a game table in Vegas gambling his payroll money to try to increase it enough to cover payroll.

And you thought your boss was bad. 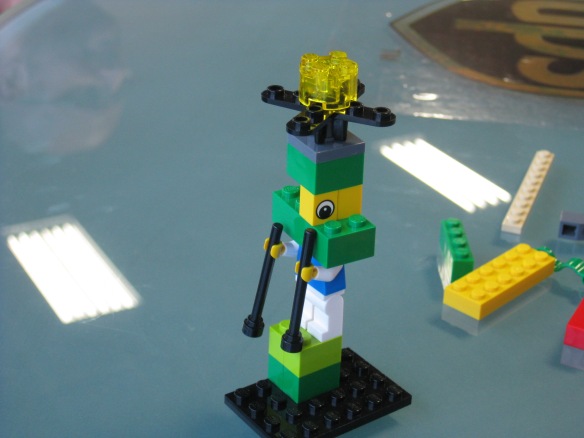 This is the co-worker everyone wants to work with. She has a solid grounding in reality, and her shoes are high enough to keep her out of the shit. She has a good head on her shoulders, able to see where she’s going, where she came from, and what’s going on around her. Plus a great hat that keeps the shit off her head, should it fall from above. And her walking sticks keep her balanced and help her get shit done.

I love how vivid a story is when it’s based on a model! And the person who builds the model needs to tell the story, or we might interpret this person as a blockhead and a propeller-head who is nerdy and not good inter-personally. But the real story is better. 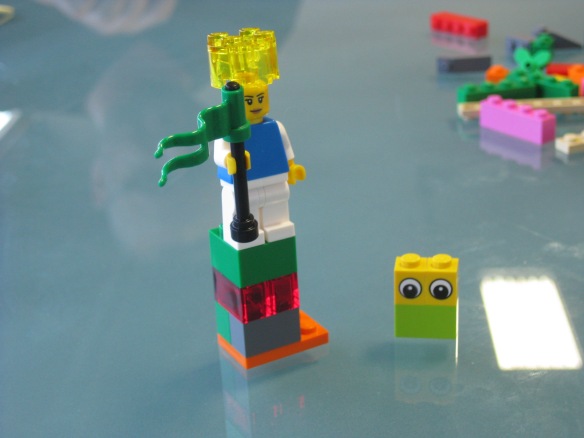 This is the client from hell, but I see similar themes when people build bosses they don’t like. In this case the client put herself on a pedestal and gave herself a crown. She thinks she’s so much better than the woman there to serve her, represented as a lowly pair of eyes. It’s not so much fun to serve those who come across as arrogant and entitled. 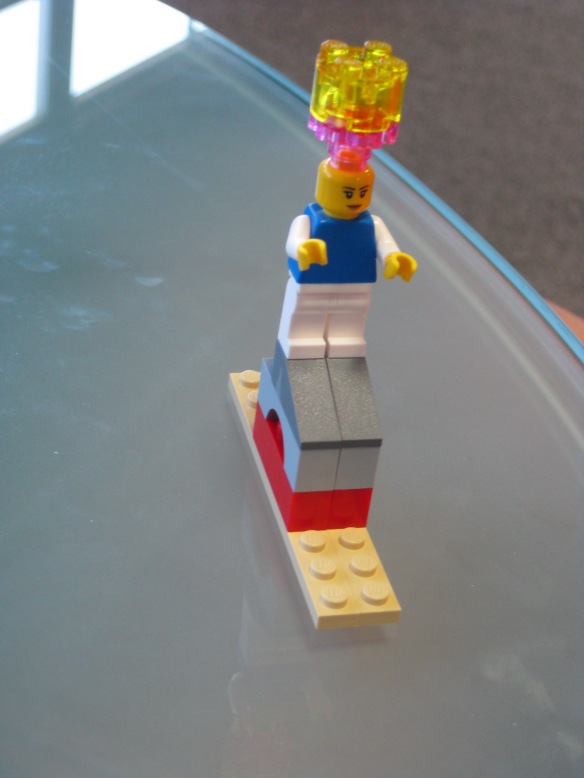 Sometimes a client can be both best and worst at the same time. This one he knew by the shoes. This client has very expensive shoes. Which means they have a lot of money. But it also means they will be very demanding with lots of ideas. So on the plus side, a big lucrative job, and on the minus side, lots of work and lots of accommodation.

If you had to build your best or worst boss or client, what would you build?

I did a team building workshop with St. Mary’s College staff last week, and people were able to express a lot with the models they built. These models all show the worst boss these people had. Can you tell from the pictures what made them so bad? 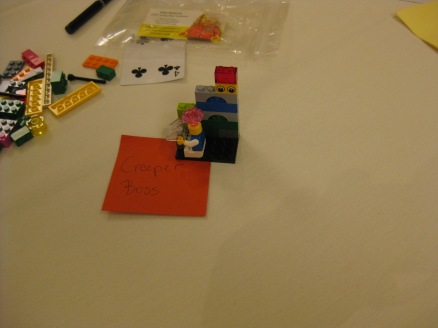 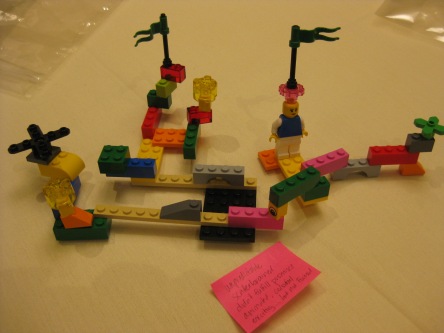 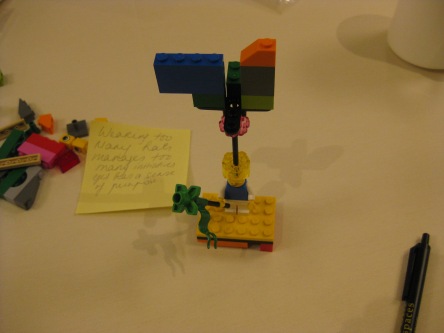 I mentioned last week that a model can hold your story, so you don’t have to hold on to what you want to say in your head. This frees you up to listen to what other people are saying, and to make creative connections between ideas. Can you see from these pictures how well they hold ideas? I will never mistake that creeper boss on the top for anything other than someone peering over the wall at me. I don’t need to keep that boss’s name in my head, or remember anything else about him, that image will remind me of what I wanted to say.

Interestingly, sometimes models help people tell even richer stories. The scatterbrained boss could have just been scatterbrained, but this boss was credited with being colorful and exciting, as well as being tarred with being unpredictable and full of empty promises. Sometimes having a lot of detail in a model can give you more of a skeleton to hang your story on, so your story gets richer in the telling than you expected it to be when you built the model. This is helped by not rehearsing in our heads what we will say, but letting it come to us in the moment while we are explaining what we built.

So much creativity and fun comes out of these workshops, as well as a greater understanding of who you are working with and what they need. Everyone feels better understood and appreciated and heard. What team can you think of that could use some better communication? Who do you want to build as your worst boss? Come play!

Know what this is? 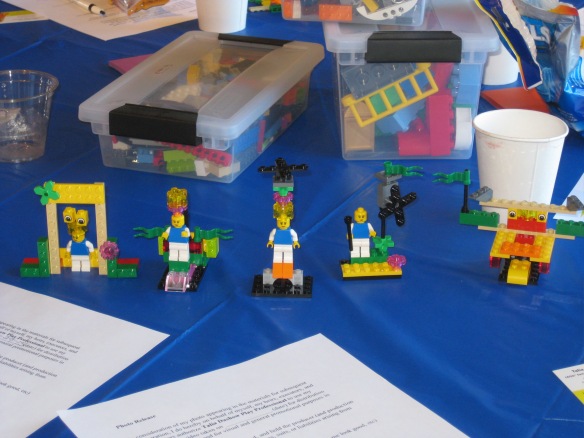 This is the diversity of thinking within your group, made concrete. Each of these models came from the same packet of bricks and the same instructions: Build a tower. All five towers look different. This is because everyone brings their own ideas, experiences, likes and dislikes, feelings, and thoughts to everything they do, and when they are encouraged to bring themselves into the group, they can come up with creative and interesting ideas.

However, many of the creative ideas never get voiced. When your boss expects your tower to look like his because you have the same materials and instructions, you eventually stop trying to make your own tower and just ask what he wants. When your teacher at school, or your parents at home, continually told you that your tower should look a certain way, you probably stopped making your own tower and did what they wanted.

Once the habit of bringing ourselves to what we do gets squashed, it can be hard to bring it back. When the manager who says “build it this way” comes to you and asks you to “think outside the box,” does that feel safe? Even though there is this amazing diversity of thinking in our groups, we often end up saying the same things because we want to keep our jobs, be liked, not be attacked, fit in with the group, not rock the boat, etc. It gets so that it can be hard to even find the creative thinking inside ourselves.

My solution to that: Play! Set up situations where there is no right or wrong answer, no possibility to fail, and practice working those creativity muscles. More on that in another post.

In the mean time – appreciate the diversity of thinking all around you!

A while back I did a LEGO® SERIOUS PLAY® workshop with a group of people who were making a documentary about the Bayview and Hunters Point neighborhoods in San Francisco. They had a lot of footage, and a lot of ideas about what to focus on, and who else to film, but they were having a hard time figuring out how to make it all jell. It’s possible to look at all the disadvantages, violence, crime, environmental harm, etc., or to look at the way the community comes together, tries to make things better, grows community gardens, etc.

So, I worked with them to build a LEGO® model about all the things that were important to incorporate into the movie. In the end, we had a model with a clear story line running through it. The model looked like this:

Can you see the resemblance? 😉

I’m honored to have helped with this movie, even a tiny bit. I know the people who made it worked hard, cared a lot, and came together to make something amazing.

A while back I wrote about The Lego Movie and its assertion that creativity required both structure and imagination. I’ve written about how my best Halloween costumes were made when I had the structure of a theme to work with. And now comes an article in the July/August 2014 issue of The Atlantic about creative pairs, especially John Lennon and Paul McCartney of The Beatles.

Apparently, John Lennon was rude, unorganized, impatient, and defiant. Paul McCartney was polite, neat, organized, and conventional. And it was exactly the fact that they were so opposite that made them such a brilliant pair of songwriters. They needed each other – Paul needed someone to break open his control, and John needed someone to reign in his lack of control. In fact, John could be rude because Paul was so polite – he knew there was someone to take the edge off and make the reporters comfortable.

“Paul and John seemed to be almost archetypal embodiments of order and disorder. The ancient Greeks gave form to these two sides of human nature in Apollo, who stood for the rational and the self-disciplined, and Dionysus, who represented the spontaneous and the emotional. Friedrich Nietzsche proposed that the interaction of the Apollonian and the Dionysian was the foundation of creative work, and modern creativity research has confirmed this insight, revealing the key relationship between breaking and making, challenging and refining, disrupting and organizing.” p79

I find this fascinating. There is a big value placed on individual creativity. In fact, a lot of artists do work in isolation, writing or painting or practicing alone for hours. And yet, finding one’s opposite can spark more creativity.

I think it’s not just the blending of structure and chaos that’s so important to creativity. I think that having other people to bounce ideas off is vitally important. I often find myself explaining something I didn’t realize I knew or thought or felt when I talk to someone else. This comes out in LEGO® Serious Play® too – people build information they didn’t realize they had in their heads. But it’s hard to do this in isolation. It takes being in a group to make the insights flow. It takes other people, and their ideas, and their listening to our ideas, and the new ideas that sprout from the intersection. The ideas become more robust when they’re torn apart and rebuilt, iterated until they fit, redrawn until they resonate with everyone. When models are put together with everyone’s viewpoints incorporated and not done until everyone feels it’s right.

For some things, fewer people are better. Songwriting by committee tends to be uninspired. Having just two people with such tension between them can make immensely better songs. Some things need more people, especially projects that will affect a large number of people. There is so much knowledge and ability locked away inside people’s heads, just waiting for the creative spark to let it out! And people who experience this creative connection find it immensely satisfying. 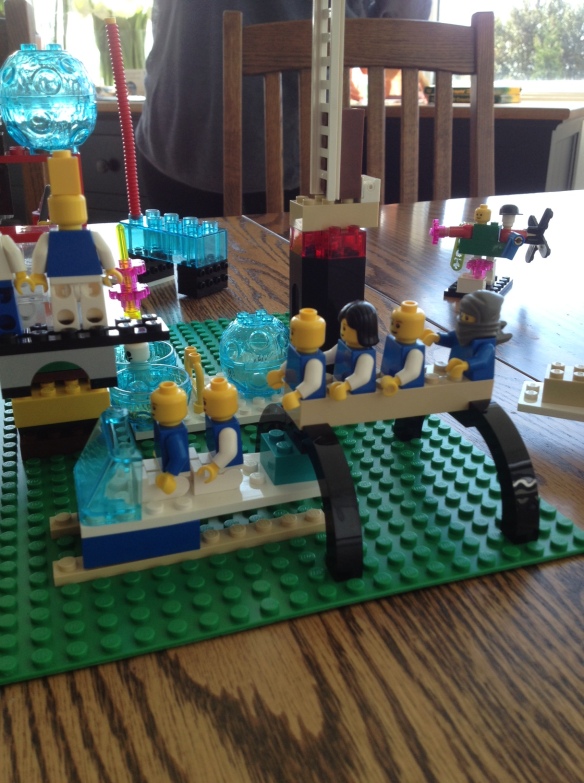 Is everyone in your organization rowing in the same direction? Even the ninja in the back? Is the team on the ground keeping in front of the team with their heads in the clouds? Can anyone even row when they’re so far up?
(I’d love to talk to you if your team could use some help with their rowing! taliaehrlich@yahoo.com)